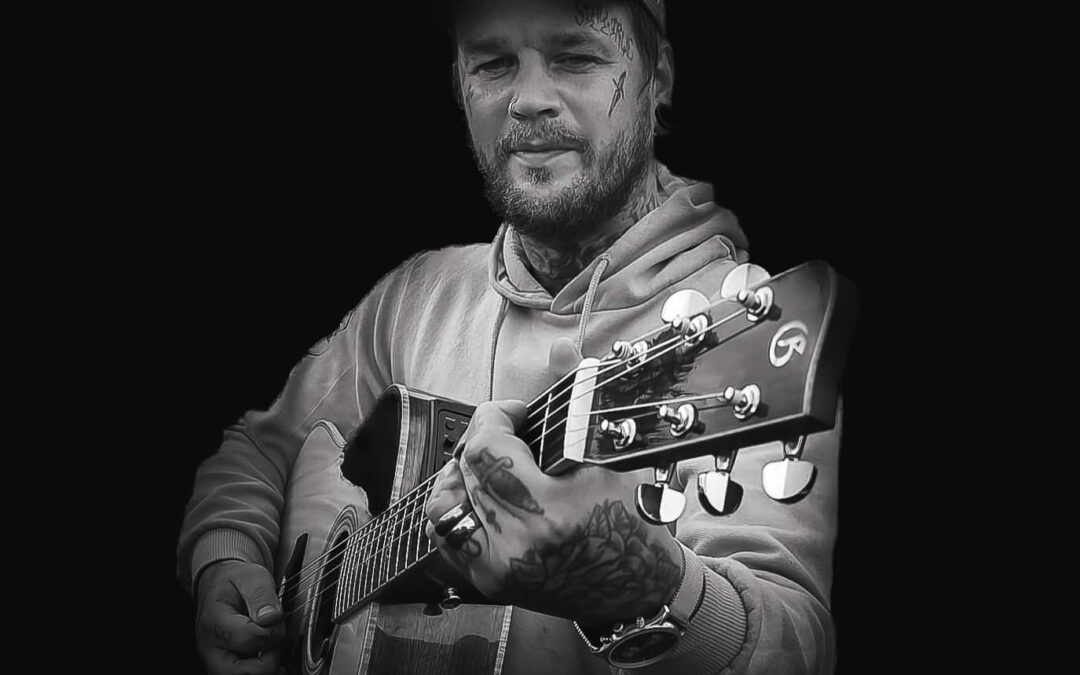 Patrik will impress you with his playing.  If you have a chance to get to know him, he will also impress you with his big heart and kind nature.  He offers free lessons through Flatpick Nation.  He is enthusiastic about bluegrass music and loves sharing it with others.

In his own words:  “I, as many others, saw the movie, O Brother, Where Art Thou?, and that’s how I discovered bluegrass music. I heard the G-run and some cool guitar stuff in that movie that I had not heard before. So I remember that I searched on YouTube for Bluegrass guitar and found this big thing of cool stuff you could do.

I, as so many others, loved to hear Doc Watson,Tony Rice and Norman Blake. So I tried to learn that stuff and had 3-4 standard tunes in my arsenal the first week.  From there the interest just grew on me.

In 2015 I worked in Stockholm for people with special needs.  I showed one of my students a clip of a guy playing a Celtic tune. The student of mine laid his head on the iPad and immediately LOVED it.  That person playing was JP Cormier.

From there, I contacted JP and showed him a video of the student listening to his music.  We have been friends ever since. I tried JPs music which was a challenge because he did things with a guitar I never tried; tunes I never had never heard. Later I learned these were his original tunes.

You can say that from 2015 is when my journey of bluegrass started,and I have a lot thanks to  JP for that, he has been the best mentor online. In 2022 we finally met in real life in Scotland. And in September we are going to play together in Sweden.

You can subscribe to Flatpick Nation on his YouTube page as well.  We are sure you will enjoy his offerings.  Learn more about Patrik on his Facebook Page

Patrik has a happy ending story of being reunited with his Gallagher guitar.

In 2015-04-27 I also purchased my first real deal guitar,a Doc Watson Signature custom with that sweet flamed maple binding and Adirondack top.  I did need some money so I had to go sell that Gallagher. Which i have regretted since 2016, I only owned it a year or maybe less.

Recently,  I was at a bluegrass festival. I was at my friend Conny’s Caravan. We played good music, old Bill Monroe and New South etc. Good ole bluegrass. I told him (he was the guy i sold the Gallagher too) I missed it so much and would just love to play it, there was no way I could buy it back again because .. well. Children and so on. Anyway, I hadn’t seen it since 2016.

So Conny goes ” Well Kurre has it”. Kurre is another friend of ours but I didn’t know he owned it. And Conny says ” it’s just 3 meters from you,go talk to him”.

So with a heart as big as a mountain and crazy pulse I walk over to Kurre and say ” dude,you have my Gallagher??” And laughingly smiles and stuff.

I opened the case and sure enough,this was THE guitar. I could see it ,I could smell the sound hole and right away knew it was the one.  So he lifts it up and says ” you wanna own the Gallagher, it’s yours”. I learned tons of tunes from JP on that guitar but also so much rhythm from my best friend Yves Aerts, who sadly passed away in a Canoe accident.  This is why this particular guitar means very much to me.

Galllagher will always have a special place in my heart,and also JP Cormier and Yves Aerts.